Africa Utopia – the 52 countries in one of the most disparate and diverse continents in a perfect state.  That is what we want!

The 2019 African Utopia took place at London Southbank in collaboration with Indaba X. It was opened by Kojo Annan, the son of the former UN Secretary General Kofi Annan, who shared his father’s dreams and reminded us how important the youth in Africa will be to Africa’s future. His father often spoke of the significance of the young and old working together.  Ancient wisdom combined with new ideas taking place in a perfect Africa.

Some of the best speakers, performers, singers, artisans and writers came together under this event.  Established and seasoned performers appeared alongside new and vibrant artists.

The famous Shrine, created by the legendary musician Fela Kuti was transported from its Lagos hub to the Southbank shores and opened with Akala and Talib Kwell.  Both are great hip-hop artists who warmed up the audience while awaiting for the arrival of the great Femi Kuti.  We had known his father’s music and we were here to relive the jazz, politics and fun he had given us.  It was a pleasure when Femi walked by, enabling me to fulfil a promise to my Nigerian family in Malaysia that I would have a photo with the big man himself! (See photo below) 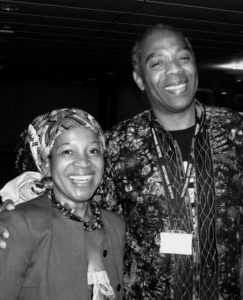 The Friday evening performance afforded us the opportunity to see Femi Kuti in full effect as he performed under the pictures of his parents, Fela and Remilekun Ransom-Kuti.  The images of Martin Luther King and Malcolm X were also on display as we witnessed Kuti’s phenomenal and unique style.  He played alongside his son Made, under the watchful eyes of his parent which was a beautiful moment of nostalgia.  An unexpected and precious part of the evening came when Yasiin Bey (aka Mos Def) graced the stage and performed with Femi.

On Saturday and Sunday, there was a buzzing market, a range of fashion talks, art displays and powerful music performances. The Afro Queens Afrobeat workshop had the crowds jumping, bumping and getting down to the latest tunes.

It was Dr Vernon’s question of how to create a permanent space that chronicles the diverse history of black people in the UK that struck a chord with me. The issue was raised following his visit to the Smithsonian Museum in Washington. 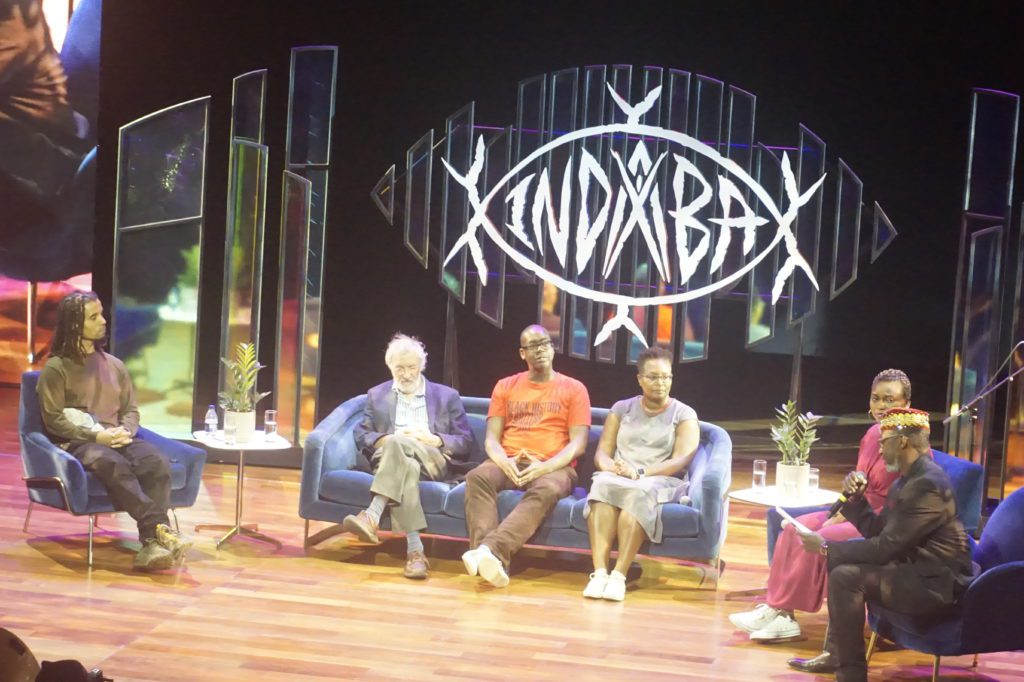 Professor David Killingray pointed out that books are generally out of date once they are published. Since we live in a time when new information is released every second, he enquired how to get information to young people in a format that works for them?

Derek Owusu’s anthology entitled SAFE introduced some of the contributions made by Black British men. The powerful reflections of one poet who had learned the importance of the ‘F word’ resonated deeply.  He spoke of his father’s mistreatment and on traveling home to Nigeria, he saw how the men in his father’s life had not been taught about the whole spectrum and meaning of what being a man is. Hence, anything that was not masculine in the most stereotypical way, was not loved, cherished or understood.  He had learned the importance of ‘Forgiveness‘ for his own healing and his father’s so that he could successfully father his own children.

The three day festival was packed with many events running simultaneously.  On a warm and sunny weekend in London, it was great to experience the vibrancy and energy of Africa brought to the Southbank by this event. It was fabulous to reconnect with people from years ago.  May these events continue, as we strive to create a Utopia, not just for a weekend in London but in all countries across Africa.

For whats on at the Southbank see; https://www.southbankcentre.co.uk/whats-on