After two years of absence from the Houses of Parliament due to COVID, the annual event to honour Black History Month and Diversity took place on 25th October 2021. The event, held at the House of Lords, remained true to tradition and maintained the high ideals of previous years.

Coordinator Mercy Francis together with Founders of the FredommeE.com platform, Francesca Giobbi and Bruna Leo from Brazil, hosted the event to raise awareness of their goal  to create a collaborative circular economy.

Setting the tone of the international hybrid event, Founder Francesca Giobbi opened the programme by introducing the work of the FredommeE.com platform. Francesca underlined the need to bring together a network of people intent on bringing change using technology for the benefit of humanity.

“ We believe in an economy that sustains the business of entrepreneurs,consumers, philanthropists and innovative investors. We want to provide practical solutions that will support the livelihoods of women.” 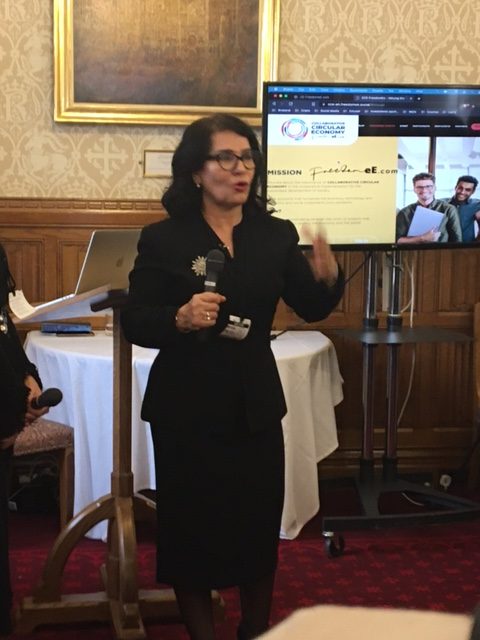 Niddah Sabbagh (above), a Political Advisor from the Middle East spoke of her traumatic memories of witnessing her sisters passing brought on by instability in the region. From that time, she set on a task to build peace, prosperity and security for future generations. Niddah explained that she had attended too many summits previously that had become mere talking shops. She was determined to make a difference in 2021 and challenge the lack of gender parity in the professional and technical jobs in the Middle East.

Niddah pointed to the pressing matter of the digital revolution and how women should be ‘equipped to engage and take advantage of the opportunity.” Niddah expressed that across the Middle East, female labour participation remained low at only 24% when the global average was 47,8%. Niddah argued that the way to reduce inequality was to focus on four indicators; Educational attainment, digital and financial inclusion and legal protection.

Short term policy planning, a practice implemented by many politicians across the board, is one of the factors hindering the establishment of a circular economy. This is the view maintained by Francis Sealy, a former BBC executive who now runs his own civil society network, GlobalNet21, encouraging civil engagement.

Sealy believes that leaders need a paradigm shift away from a growth economy to a more collaborative economy. He said the recent financial and climate crises’ together with COVId 19 have made the call more urgent.

Nero Ughwujabo, congratulated the founders of the FredommeE campaign to elevate women. An advisor to 4 British Prime Ministers and former board member of the Princes Trust, Nero spoke of his concern to raise women’s education. Nero is now the chief executive of a community organisation focused on social justice. He praised the FredommeE.com’s emphasis on enterprise rather than hand outs, helping women to set up businesses.

Bruno Leo, the Technical Partner on the FredommeE.com organisation reminded the audience of the strong trading links between UK and her country Portugal. She praised UK’s tradition of freedom of choice and reiterated the FredommeE mantra of using technology to trade and create sustainable economies.

Bruno spent years observing the ‘slave’ practices of the fashion industry based in Mumbai. She witnessed trafficking and a business model that dehumanized people. She vowed to use her technical skills to bring about change and constructed algorithms that would support a circular economy, generating sustainable incomes for poorer communities. 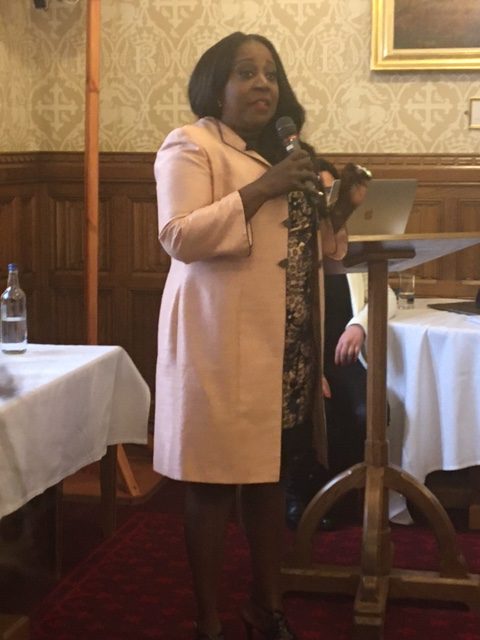 Bernie Davies, (pictured above), knew from when she was a small girl that she was heading places. Originally from Jamaica, by way of Wales, Bernie was taught life lessons early from her mother.  ‘Know yourself’ and ‘free yourself from the shackles of others’ opinions’. Her mother would say. Bernie is now a publisher, author and Tedx speaker and a leader in diversity and entrepreneurship. She has won numerous awards including, the TOP 100 Business Women in Wales, Swansea Black Icon and winner of the Excellence in Business Award. Bernie is dedicated to helping women thrive in business.

After years spent working in Africa, Sir Richard Heygate was convinced that Africa’s solutions can only come from African communities, particularly those led by women.   He articulated the importance of diaspora communities and the role they play in developing African economies. He cited the example of the Zimbabwean diaspora who are responsible for transferring 10 billion dollars in remittances. These funds can be directed towards investment projects. In a country that cannot rely on formal institutions like government, banking systems and venture capitalism, communities rely on themselves to source funding. Sir Richard Heygate is involved in one such project to set up a sustainable tourism business in Zimbabwe.

‘Act on your dreams not fears’ is the philosophy of Ana Sepulveda, a campaigner for the rights of the aging populations based in Portugal. She is looking at ways to improve the longevity economy. Ana argues that ageing populations are often ignored in economic planning. Ana would like to see an age friendly society, where the concept of active ageing is promoted positively as a means of economic growth.