Amongst the wealth of activities scheduled during Black History Month, was one in particular which may not have garnered the headlines but was no less significant. The event was held at Parliament on Thursday 25th October and coordinated by the well-connected Mercy Gilbert Francis, an active member of the Operation Black Vote team and a Select Committee member of her local Conservative party in Bromley.

Speakers from all walks of life were invited to share their stories about how they overcame challenges, turned around difficult circumstances and made a difference to those around them and the community at large.

Incidentally, we all know that Black History Month was created to redress the lack of black figures represented in our history books. To this goal, so far, the gap is being redressed to the extent that we do not have to keep portraying the same African American figures on posters and publicity images, when we have a good selection of our own UK legends already.

Commencing the programme was a beautiful recital from young members of the Chineke Orchestra, Jesse, James and Michael Francis. The orchestra is an all-black ensemble showcasing the best classical musicians in Europe. The young artistes certainly did the Orchestra proud.

Then an introductory piece from Damel, representing the Humanity for Grenfell campaign, followed. Damel updated the audience on inquiry proceedings which in his words were going slowly and proving to be an “ongoing fight to get to the truth.” Damel was featured in this magazine. (See link https://diversitybusinesspromotes.uk/grenfell-seen-artistic-eye-damel-caryol/).

Shaun Bailey, a rising star in the Conservative party and first black mayoral candidate spoke eloquently of the need to “build networks and mentor just like they do in Indian, Pakistani communities”. He cited mental health and education as the biggest issues facing the community but argued that challenging ‘what others think of us and how we think of ourselves’ is the path to self-confidence and success.

Prof Chris Imafidon is doing just that by building confidence of students from inner cities. Through his charity, he encourages excellence by producing first class students in science, technology, engineering and mathematics. Prof Imafidon criticises the current education system for being out of touch and operating more like ‘paper mills for certificates ‘ which do not serve current or future generations’. Imafidon believes all children are born geniuses and if given the right tools can achieve greatness. As he says, “one’s postcode should not define one’s brain code!” Prof Imafidon is an Advisor to the government and Leader and Chair of the programme ‘Excellence in Education’. 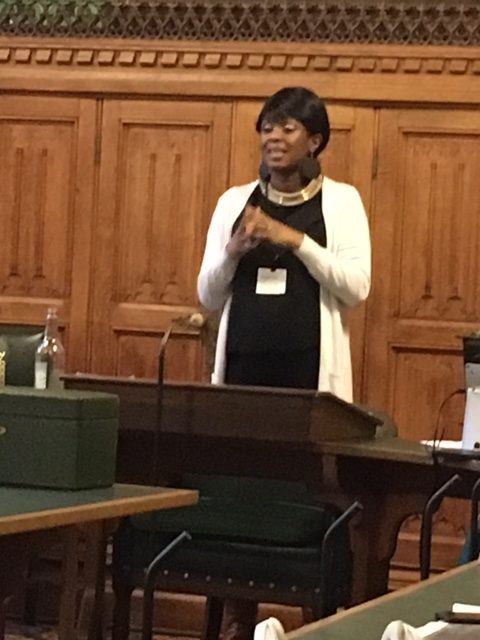 Dr Clare Anyiam-Osigwe (above) has achieved excellence in her field of health, beauty, film making and communications. Her story is a testimony to the sheer power of perseverance against the odds.  Dr Clare was brought up in a care home, yet lived to fulfil her dreams of creating the first vegan friendly beauty products and becoming a certified dermatologist owning a Harley Street clinic. Another first for Dr Clare was achieving her childhood ambition of writing and producing a feature film called ‘No Shade’ which is out in selected cinemas across London. The film deals with colourism, a topic not openly discussed in African and Caribbean communities.

Dr Pauline Long came to UK shores with entrepreneurship on her mind only to be told that the highest role she could achieve was a cleaning job. Sure enough Dr Pauline started as a chamber maid but her ambitions were never dimmed. She launched the charity ‘Feed the Streets Campaign’ using a Beauty Pageant to fundraise after seeing negative images of her native Kenya. The programme has now been rolled out to ten cities and Dr Pauline has received the Innovative Kenyan Award for her efforts. Realising her ambition to work in the entertainment industry, Dr Pauline has promoted Black and Ethnic Minority professionals through the creation of the BEFFTA awards. She has also built her own studios which are now being hired by the big players – the BBC, Netflix, and Channel 4. There’s no stopping the woman who started off as a chamber maid but has reached the heights of her industry.

Marcia Dixon proves she is in it for the long haul, as she marks thirty years in media. Starting off at the Voice Newspaper, Marcia’s path saw her become editor of ‘Keep the Faith, a publication aimed at the Black Christian community. She even started her own PR Company, becoming the first PR business specifically promoting black Christian churches. As Marcia says, “there are few institutions that are completely black owned.” Marcia has worked with the Kingdom Choir who recently sang at Prince Harry and Meghan’s royal’s wedding.

A worthy mention goes to artists Michael Echekoba, whose artworks lined the room and spoke of his struggles to become an artist amongst the backdrop of a conservative Nigerian community. He has co-founded the UK Nigerian Artist Collective. Fellow artist Fudge Hamurg touches on issues of mental health. She is based in Scotland and challenged the exclusive nature of holding most Black History events in London and the South.  In the audience, the dramatist Nina Kristofferson could not go unnoticed. She has recently produced and staged the critically acclaimed ‘The Billy Holiday Story’ and is in the midst of penning a show about Nina Simone. More is expected from this unique talent.

In the words of the young mayoral candidate Shaun Bailey who neatly summed up the significance of the occasion when he said, “We need to be everywhere and anywhere raising our voices. In particular we need and deserve to be in Parliament.’ Indeed, there was enough talent and enough history makers that day, raising their voices and shaking the hallowed walls of Westminster for years to come.