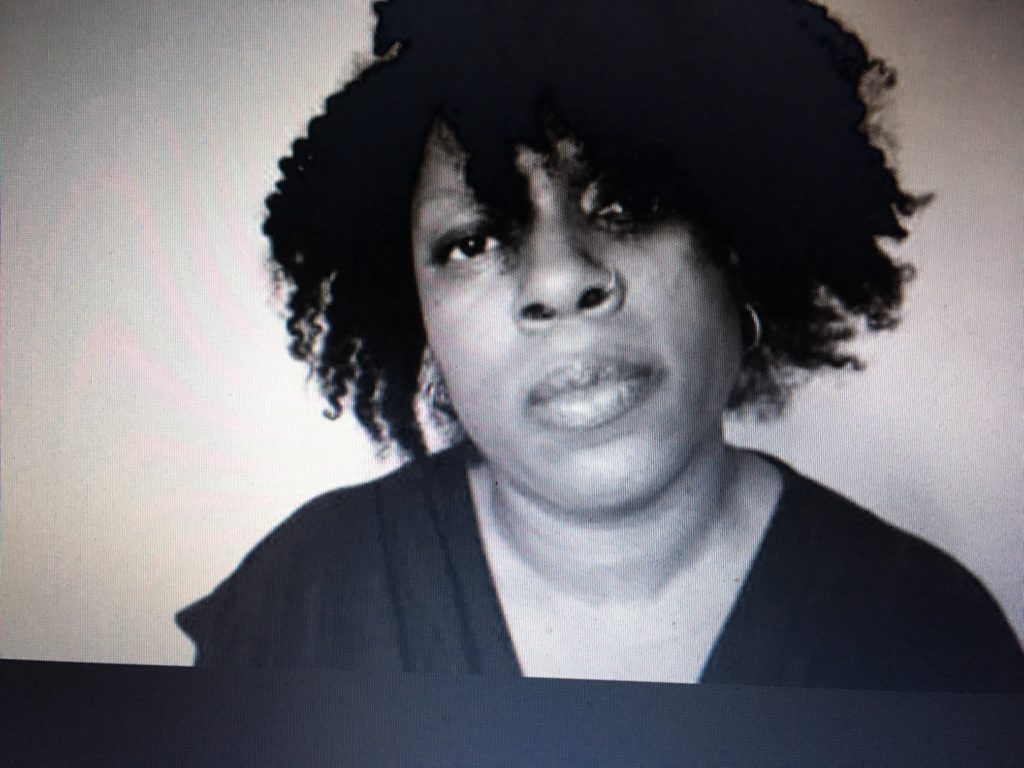 (This is the full version of a personal account of being a participant of an online research community, that appeared on Research Live on 11th December 2018. What follows is Shae Eccleston’s account of her incredible experience)

Shae Eccleston: In 2014, I took part in an online community of cancer patients. The cancer patients in the study were from an ethnic minority background, or LGBT or aged 65 and over. I was not aware of it at the time, but that was because national survey evidence showed that cancer patients with these characteristics were less satisfied and had poorer outcomes in cancer services than other cancer patients. So the aims of the project were to understand why this was the case and to learn from cancer patients like me how to improve services to reduce these inequalities.

I had taken part in many surveys before. I was willing to share my thoughts. In my mind, I knew what researchers wanted to hear: they would ask relatively standard questions how I felt about my diagnosis, how it affected me, what changes had to be made in my everyday life and what I felt could have been better. I also knew what I wanted to tell them.

When I was invited to take part in this study, I thought that the only real difference with this research was that it would take place remotely and that it would last about eight weeks. I hadn’t taken part in this kind of digital research before, but the method of data collection did not matter to me. I was prepared to give the research team what they needed and this was just another way to do that.

I had made all of the assumptions above before the project had started. My frame of mind was limited in a way I did not really understand until weeks after the project’s conclusion.

I started answering questions in the online community by giving short, canned responses to deep questions. I wanted to contribute but I didn’t want to hurt more than I already did, so I stayed in the safe area and told the research team only what had been tried and tested. However, as the study progressed, the researchers – who to me began to feel more like virtual support – found a way to convince me that they wanted to hear my real experience. They truly wanted to use what I would share to make a difference. They also seemed to care about me, and all the other participants in this community, as individuals.

I realised, looking back, that I answered some 50 questions, over eight weeks, about most aspects of my experience as a cancer patient. The questions covered the entire cancer journey: from fighting to be taken seriously by my GP to getting my devastating diagnosis; from struggling to navigate a hugely complex health service to experiencing anxiety about how I would make ends meet financially; from undergoing cancer treatment to learning to live with the long term consequences of treatment and enduring uncertainty.

The questions required soul-searching, not box-ticking. For instance, we were asked to write the diary entry we would have written on the day we received our diagnosis. We were also provided a virtual ‘bin’ (in which we could put all the negative experiences we had) and a ‘gratitude box’ (in which we could store all that was positive in our life), which was liberating and uplifting. Another question required us to imagine having a leisurely cup of tea with our doctors and to rehearse what we would really want to tell or ask them. Where relevant, we were also invited to talk about preparing for the end of our life – an impossibly difficult topic when one has a cancer diagnosis. It might have been gruelling but it felt only warm, supportive and important.

The answers poured out of me, as well as out of the other cancer patients. We had been gently coaxed into deeper and deeper disclosures. What a far cry from survey, interview or focus group answers!

Those eight weeks went quickly and the format of the research – an interactive, confidential, safe online environment where we were given the time and space to answer questions when it was convenient – made taking part flexible, accessible, even empowering.

I think I can safely say that all of the cancer patients who took part were moved and changed by one another’s stories. We had the space to share and support one another. We opened up a lot and were able to communicate, contribute and empathise with others whose experiences were as simple and as complicated as our own. We went on a journey – this one had been real.

The researchers also underwent something profound. At the end of the study, they had come to really care about each one of us. So much so that they took the time to collate all our individual responses and to send the collated data back to each one of us, for safekeeping. This act was to be something that would touch my life years later.

In 2017, emboldened by the experience, I started working with the East of England Cancer Alliance as a member of the Patient Advisory Board. What I thought would be light volunteering quickly proved to be an onerous undertaking that led to opportunity after opportunity to impact services for cancer patients across the UK.

There was a lot I didn’t understand. The language was above me at times, with clinicians speaking jargon, statistics and performance indicators – a language that, as a patient, I didn’t care for. I was there to be a patient representative and they were talking about all patients as statistics.

It took me a while to find my feet but after some time, I realised that, in all seven of the groups in which I had become involved, the one area that needed urgent attention was the patient experience. What patients valued and what clinicians felt patients valued and should value, were vastly different. I had found my cause and worked to champion the patient’s true voice at every meeting I attended.

Some members bought into the idea that patients were people beyond their diagnosis. Even if they didn’t fully understand how to validate their experiences, they wanted to hear what patients had to say and were prepared to do something to improve experiences. It was clear, however, that others were clueless as to why bedside manner and individual patients’ fears, hopes and dreams should be considered alongside clinical pathways.

I found that I was speaking around and around the same topics often, trying to find various ways to explain why what I was saying was valid and more than just an exception to the rule. It was at this time I remembered the file containing all my patient experience data from the online research community.

In 2014, I was not the patient who could say what she wanted to. I would not have been able to stand in a room of PHD-clad professionals and point them in directions they failed or feared to walk in. I would not have been able to fight to cross the country for meetings that everyone else was paid to attend. I was unable to do all of those things because I was ‘living with and beyond cancer’, as healthcare professionals often describe people like me.

Even today, it is not easy to bring the voice of patients to healthcare professionals. Not just because of some people’s inability to truly listen, but because it is hard to convey how my diagnosis has changed my life: any contemporary account lacks the emotional rawness, the confusion, the despair, the unmet needs as I experienced them four years ago.

This is where the file shared by the research team proved so transformational. It provided vivid proof of what I had lived and felt then. As I read through, I remembered every feeling, every pain and every struggle. I didn’t have to use my memory of what I was like then; it had been recorded.

As I read and reread, I was blown away by the skill and the kindness of the researchers – professionals who had no medical training related to our varied cancers but who were able to show an understanding and empathy that was invaluable.

I also observed a change in my own tone and in the amount I was willing to share, again a reflection of the way the researchers made me feel. They offered a safe space for me to be honest about what really mattered to me as a cancer patient at a time when I no longer knew who I was and how to be myself. They reconnected me with myself. An incredible gift.

Since finding that record of my journey, I have shared that data with the various groups I have become a part of. Others could now see the value of empathy and understanding. They could observe what ‘listening’ felt like and the impact this has on patients. They could see that although I didn’t want to die back then, I did not have the tools to live the life I deserved. The physical pain was nothing compared to the emotional pain cancer had caused me and the researchers had enabled me to express and work through that perfectly. There was learning to be done and by capturing and sharing the snapshot of my life as they had, the researchers had impacted me in way I could never have imagined. Merely surviving was no longer enough.

The feedback received from those with whom I shared my answers to that online community has been astounding. It has helped people to understand the everyday reality of someone struggling through diagnosis, treatment and life post trauma. The data was raw, real and very honest and, while I was somewhat on my guards initially, I am truly glad I let go of the defensiveness.

The research was funded by Macmillan Cancer Support (www.macmillan.org.uk). In addition to the three groups of people living with cancer (i.e. black, Asian and minority ethnic cancer patients, LGBT cancer patients and cancer patients aged 65 and over), the study also included a group of 24 professionals: healthcare practitioners, academics and diversity specialists who brought expertise that complemented the practical knowledge and experience of cancer patients.

The project lead was Dr Marie-Claude Gervais, Director at Versiti and the research was conducted on the online community platform Together* .

The research was independently evaluated by healthcare specialists Frontline Consultants,(www.frontline-consultants.com). The research was shortlisted for the Health Service Journal (HSJ) Award and was Finalist for the MRS Healthcare Research Award.

Since taking part in the research, Shae Eccleston Eccleston was featured on the Channel 4 Evening News in November 2016, speaking out about the loneliness she experienced after being diagnosed with cancer and the fact that she felt that she could impact the lives of others by encouraging them to seek perspectives that enhance, rather than hinder, personal growth; even whilst seriously ill.

Shae has also launched a Kickstarter campaign to fund the printing of a series of mental health enrichment tools. For more details and to donate, click here.

The article first appeared in : www.versiti.co