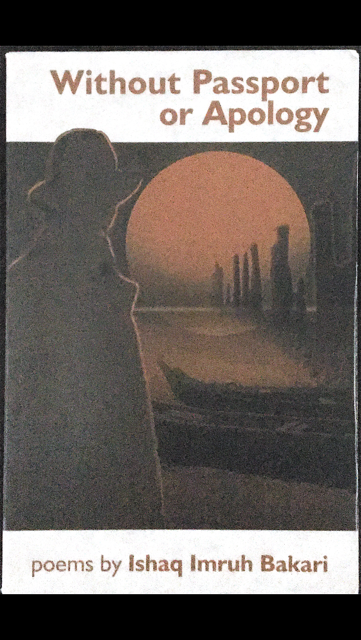 If you are able to listen to a live reading of Imruh Bakari’s  ‘Travelling Miles with You’, you will gain a taste of what his new collection of poems ‘Without Passport or Apology’ is about. In the title and the rhythmic phrasing of the reading is encompassed the recurrent themes of travel, music and the search for freedom.

‘It is something I have been deliberating for the last thirty years – how my professional life has developed around migration through film making and writing. The idea of people and places resonated very strongly,” reflects Imruh during our interview to discuss the focus of his book.

Imruh found himself travelling from the Caribbean to Europe and Africa and at every interval put his reflections on paper. ‘Travelling Miles with You’ – a salute to Cassandra Wilson’s tribute album to the great Miles Davis, points to how ‘music has been a central experience’ to Imruh’s formative years. Other musicians from Thelonious Monk to Abdullah Ibrahim are recognised in verse and shaped the author’s thinking.

On the subject of legends, the title of the book ‘Without Passport or Apology’, is a line from the poem ‘In the House of Legends’ and refers to an album ‘House of Legends’ by British Jazz artist Courtney Pine. Imruh reveals that the album is an exploration of the musician’s spiritual journey across the Caribbean and Britain mirroring his own journey, as a young man in the sixties from the Island of St Kitts to the shores of the UK.

And that’s where it all began, when as a young boy on the Island of St Kitts he yearned for something more beyond the tiny island confines:

The poem addresses “the propensity to escape the island which is part of the Caribbean make-up” says Imruh, “I remember thinking that the most interesting people had been abroad. They looked cool.  I remember feelings of being trapped in a small island, out on the periphery.”

Imruh’s search for his place in the world paralleled his increased knowledge and awareness of Pan African ideals. The poem ‘Marcus Garvey stood on Basseterre Bay Road’ is an insight into Garvey’s visit to St Kitts and the speech delivered at ‘the Mutual Improvement Society Hall’ in 1937 which influenced Imruh’s grandfather and countless others to take action and reject the historical injustices of slavery, poverty and inequality:

Imruh’s quest brings him into contact with diverse intellectuals on the pan African spectrum such as Minister Farrakhan and the works of Stuart Hall. One hears the carnival atmosphere in ‘Mister Farrakhan and the Steel band’ a referral to the minister’s fleeting visit to his Caribbean roots and the warm welcome extended to all ‘visitors’ in African cultures when returning home.

From the west coast to the East, Imruh‘s travels through Africa provide first-hand experiences of some of the worst post-colonial upheavals. As a writer trying to understand the Liberian war, the Sierra Leonean conflict and the genocide of Rwanda, Imruh bears witness to the brutal consequences of child soldiers depicted in the poem ‘Child Servant, Child Slave, Child Soldier:’

And further on in the poem,

Whereas, the curiously entitled ‘Paper Clips are Precious in Rwanda’ evokes the trauma of ordinary people mobilised to carrying out atrocious acts of savagery. “These were not criminals but refined people’ says Imruh when describing the perpetrators of genocide whom he observed while working for a few months in Rwanda. ‘It brought the message home to me that people can be coerced into anything. These are part of my encounters with African tragedies with various kinds of proximity.’

One Season of Voyages

Imruh’s East African journals reflect a lighter note though they still touch upon the dismal aftermath of Dr Livingstone’s legacy in Africa:

Dr. Livingstone you are mesmerised/we know

The legacy of confusion/the unpaid debt

Dr. Livingstone you are mesmerised/we know

Arriving at the coastal town of Bagamoyo in the 19th century, signified the end of an arduous trek from what is now inland Tanzania, to the trading port.  From this point slaves were transported across the sea to Zanzibar to be sold off into Arabian markets. The name Bagamoyo literally means ‘Lay down your Heart” in Swahili and suggests the despair of the slaves on reflection of their onward journey. The theme is beautifully raised in Imruh’s verses:

Salme’s Night Flight’ recaptures the well-known story of the Zanzibari princess who fled a life of privilege and control to marry her German lover. The dilemma of being in exile yet longing to return to your homeland is highlighted by the poignant words:

Much should be said about the presentation of the written word throughout the anthology. In the distinct phrasing of his words, Imruh brings to mind the ‘call and response’ traditions inherent in so many African cultures and reminiscent of the Dub and Performance poets of today.

There is so much to reflect upon in Imruh’s “Without Passport or Apology”. On completing the collection, you are left with the impression of having travelled the entire globe. For in writing his impressions, in a post-Brexit world that is so against the notion of ‘free movement of people’ the author reminds us that we are all at some stage migrants from somewhere, with feelings of being outsiders, never quite settling in new cultures and always looking for a location to find oneself and a place to call home.