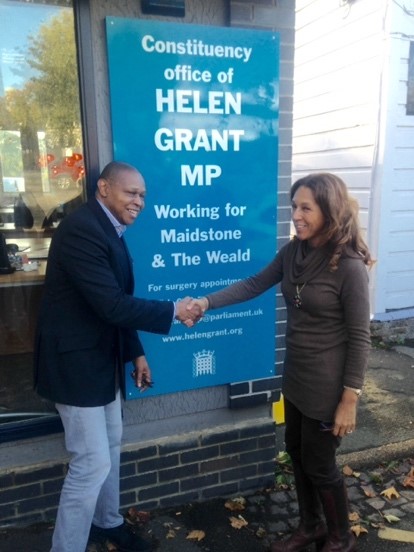 Producer, Director and Writer JD Douglas paid a courtesy call on Helen Grant MP. He was invited to meet the Member for Maidstone and Weald to update her on his Black History Month events in Kent. He recently staged the world premiere of Black Heroes of Kent at Midkent College, to critical acclaim. The show elicited the following tweet from Joseph Marcell “An excellent addition to Black History Month Celebrations.”

He was then asked to present his interactive lecture, The Colonies Contribution to World War One, at Chatham Historic Dock Yard. The lecture was originally commissioned and delivered at the British House of Commons in October 2014. The lecture was supported by an exhibition of four Black Professors across Kent Universities.

Helen Grant was elected Conservative MP for Maidstone and the Weald in 2010. A qualified solicitor her ground-breaking achievement include the accolade of being the first black woman to be selected for a conservative held Parliamentary seat; and the first elected Black Woman Conservative MP.

Douglas who has been staging a series of events in Kent during Black History Month, said Helen Grant is very busy, with a full diary. “I was most humbled that she took time out to find out what I was up to in Kent, during Black History Month. We spoke about Black Heroes of Kent. I pointed out that her considerable achievements to date merits inclusion in the production.”

Ms Grant also made a special guest appearance at Diversity House workshop on ‘Micro Nations at War; Family and Personal Stories’ at Kent County Hall in Maidstone on 27th October. The workshop forms part of the ‘Breaking the Myths: WW1 & Africa’ series which is bringing awareness of the contribution of Africans in WW1.