‘Unleash, Unlock and Impact’ was the theme of this year’s Black History Month in Parliament which was held at The Speaker’s Palace in the Halls of Westminster. Each distinguished guest, brought together by Mercy Gilbert, the Co-ordinator of the event, embodied the theme through their words, actions and legacies they are creating.

The elevated tone of the affair had already been set when all VIP guests received an invitation from the former Speaker of the House, the Rt Hon. John Bercow MP. He was expected to pop in and mingle with visitors, but as we know, other momentous events were taking place, elsewhere in Parliament.

One of the first to unleash his power on the podium was London mayoral hopeful, Shaun Bailey. Standing as a candidate for the Conservative Party, Shaun was a speaker at the 2018 Black History Month Event. His message was one of consistency, that African and Caribbean communities should not accept the status quo but challenge any kind stereotyping. The path to realising the communities’ potential, he believes, is by forming networks, raising voices and creating opportunity for one another.

Ambrose Mendy, the legendary sports promoter, had already made history by being the first black professional in his field. In his time, he worked with Nigel Benn, Chris Eubank and many more to steer their careers to sporting heights. Ambrose told many anecdotes in which he out-witted old-time promoters to push his clients to the next level.  He used creative thinking to negotiate a deal with the Great Alex Ferguson to sign up his client, footballer Paul Ince to the Manchester United team. Ambrose also raised a challenge to the Olympic Authorities to hold the Games in an African Country.

Prof Imafidon, a celebrated academic and ‘generator of genius’ gave excerpts of his own determination to turn around the educational achievements of his own children and then young people in the community who had all been classed as non achievers. Prof Imafidon is critical of the education system that suppresses the genius that lies in each young person. He argues that as long as human beings can use a ‘third of their brain, they can put a man on the moon.’ He attributes his family’s academic success not to the possession of a special gene but to the process of giving ‘information, instructing and implementing’ in a way that inspires young minds to find their special gift.

On the other hand, Alfie J Careirra didn’t need anyone to tell him he was great. From an early age, Careirra knew he was destined for bigger things as he made his way out of foster homes, a life in gangs and playing to the black youth narrative. Today Careirra has found fame as a top runway model, recording artist and judge on BBC’s Talent Show ‘All Together Now’. He advised the audience to hold true to their beliefs and share their stories of hope to inspire others. ‘Greatness is whatever you make of it,’ he said and recalled a moment when he spoke in front of a stadium of 80,000 people. Something he never thought was possible given his backstory.

Sesh Sukhdeo, the author of Unlock the Collaboration Code asked the audience to consider how many doors they had pushed, opened, unlocked or pulled to get where they were.  Recognised as an international speaker on many platforms including the UN, with government leaders and top scientists, Sesh’s start in life was humble and full of the challenges already highlighted by the brilliant speakers. Sesh’s mission is to bring people together by collaboration, exchanging ideas and values. He has mentored people from all walks of life and held the door open to let others step into their light. His great message to young people wanting to make an impact is to listen and then take action. 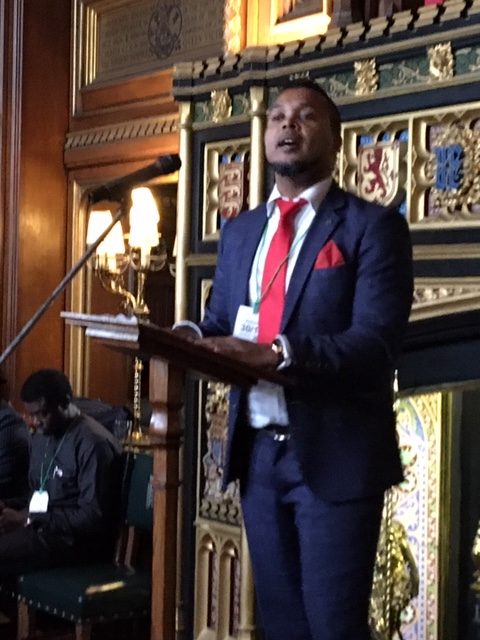 Growing up in a large Afro-Portuguese family in London, experiencing early misfortunes. Then spending time in foster care and a home with 16 young men taught Osvaldo Gomes (left) how to survive and protect himself and younger siblings. Though he found financial success as a young man, the survival skills he learnt in his early years no longer served him as he matured and tried to build relationships with others. Gomes spoke earnestly of how his selfishness destroyed his marriage and ability to act as a responsible father to his children. He had to relearn how to build relationships so he could be truly successful in all fields, including his business, as the CEO of African Portuguese Speaking Community Ltd, and engage with diverse African countries and leaders.

The same call to forge partnerships across countries and regions of the African diaspora was made by Alexandre Ifatola Dosunmu; President of Nigerian-Brazilian Chamber of Commerce & Industries and President of São Paulo racial equality Municipal Council. He raised the importance of the common heritage shared by people of African descent and called for greater cooperation educationally, economically and culturally amongst ourselves and with the African continent.

Alistair Soyode arrived on these shores with an aim to play football and nothing else. Events, however led him to an industry he had no idea about. Now the CEO of BEN TV, the television station for BAME communities, Alistair would never have pictured himself directing such a powerful organisation nor standing in front of an audience in the halls of Westminster telling his story. During the 30 years, BEN TV has been in operation, Alistair has mentored thousands of young people in the art of communications and media production. “We all depend on someone,” he said. “Look around and see who you can support. Let’s celebrate ourselves and be role models to others.”

A shout goes out to the women speakers, notably Keisha Omila, the Founder of Crown of Curls, a hair consultation business started in UK. Keisha is originally from US and made her name on the runway and big screen. She became the face of Pantene and has worked with other household names such as L’Oreal, Revlon, Cover Girl and Maybelline. As a leader, she is teaching women the importance of acceptance and self-love. 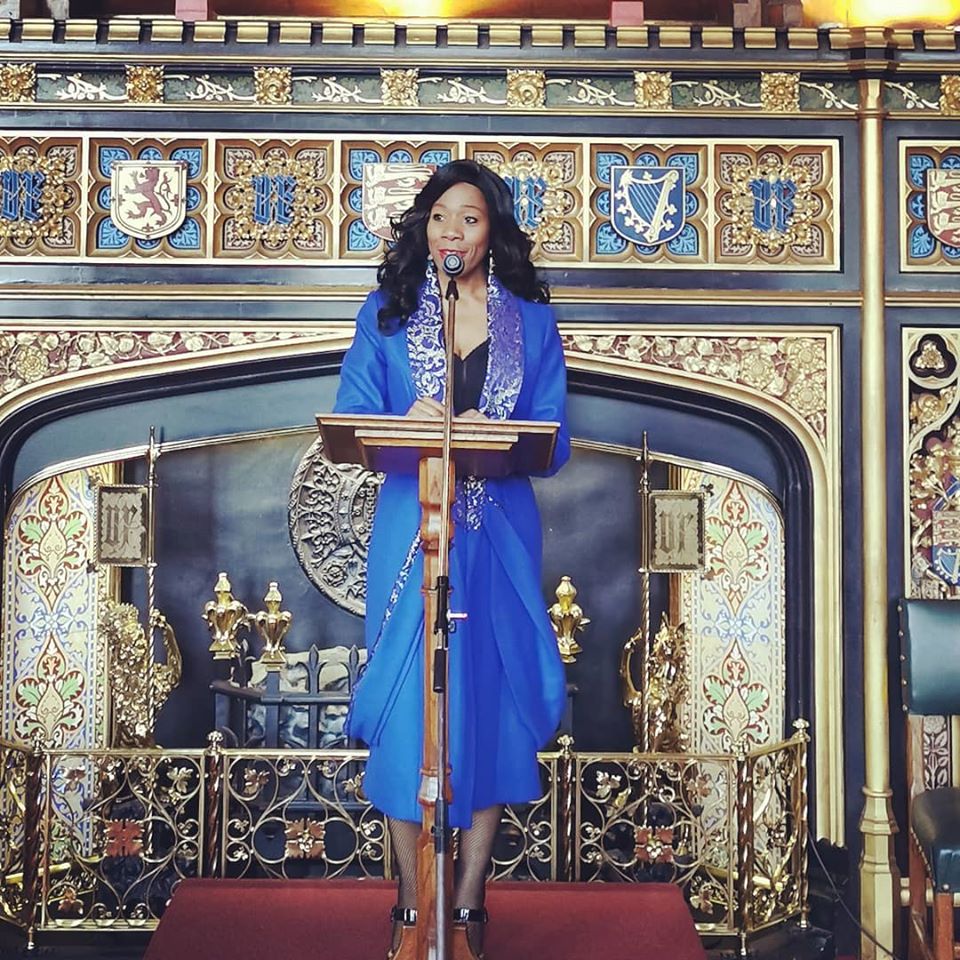 Nina Kristofferson,(above)  is a name that is gaining stardom and tributes from the world of theatre. She is among a handful of successful women producers operating in the West End. Her one woman show portraying Billie Holiday keeps running and winning critical success. She keeps pushing the boundaries as an actress, professional classical singer and producer and director. 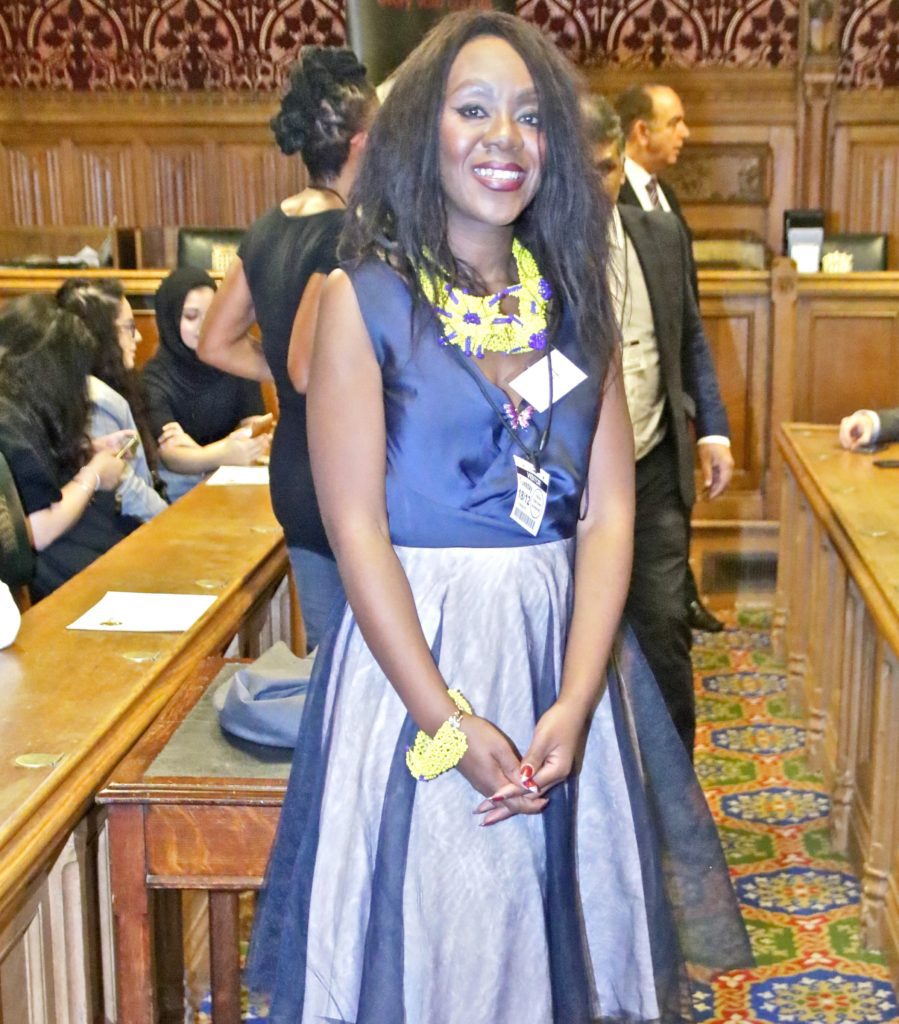 Finally, ‘Black History Month in Parliament’ would not take place were it not for the tireless efforts of Mercy Gilbert (left), the Convener of the event and member of Operation Black Vote, a Parliamentary Alumni and freelance Presenter and Journalist. Mercy created the event to honour the achievements of African and Caribbean people from all walks of life in UK. The success of the event has meant that ‘Black History Month in Parliament’ is likely to become a permanent fixture in the House of Commons and a high profile event.